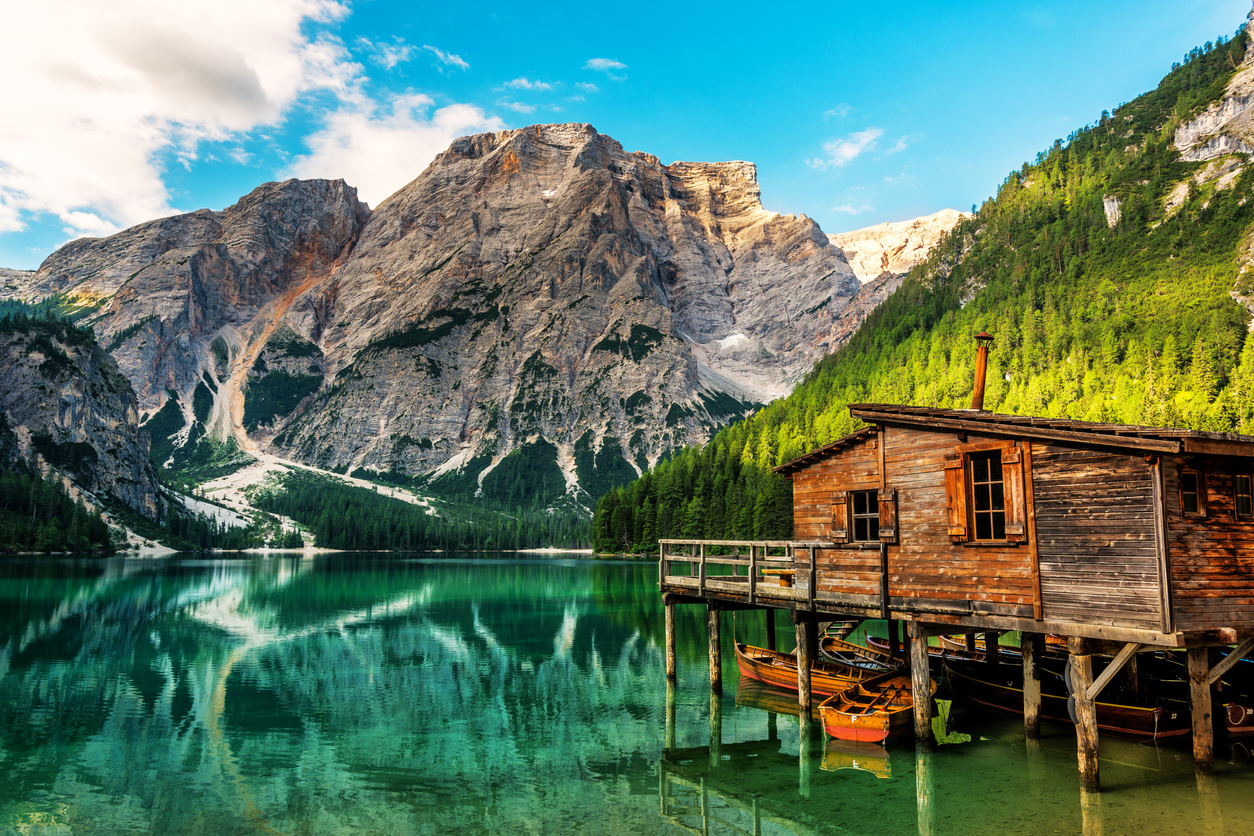 Known for its rosè-hued mountain faces, the autonomous Region of Trentino Alto Adige is a natural paradise and itinerary must, particularly for those moved and swayed by what is lacustrine. The area’s approximately three-hundred bodies of water, of varying size and dimension, and even altitude, are but glimmering jewels set within this mountainous, valleyed and plateaued landscape.

Lake Garda
Perhaps the first basin that stands out among those in Trentino is that of Garda, actually Italy’s largest lake, spreading over the border with the Regions of both Veneto and Lombardy.
The lake’s northern portion washes up on the shores, where the locales represent a strong touristic draw for nature and water sports (canoing, windsurfing) lovers, for those who wish to admire the the refined lakeside piers and docks with the Dolomites in the background, and those that just want to relax.

Torbole is a surfers’ hot spot, due to its strong winds and currents, while Arco and Riva del Garda are hubs for trekkers, campers, cyclists, those that want to revel in the hot springs, and foodies.
Just a little bit futher to the south, we can find Val di Ledro and its homonymous Lake, one of the region’s most transparent.
Here walks and excursions by bike are ideal, given the area’s 200-km-long bicycle lane; otherwise, the beach, surrounded by fields and forests, invites all who want to lay out and chill under the sun.
To get to know the zone better, especially the lake’s ancient society and settlements, be sure to visit the Museo delle Palafitte or Pile-Dwellings Museum that that displays its collection of numerous quotidian objects from the populations that lived in stilt-houses along the lakes 4,000 years ago.

Near Trento
Closer to Trento, a traipse through the Valley of the Lakes is difficult to pass up: think nine crystal-clear lakes, including Terlago, Lagolo and Lamar, as well as significant faunal and botanical variety.
Rather characteristic is the Val del Vent (Val di Cavedine), where the late morning brings a pleasant breeze that also facilitates sailing. Historic structures and evocative castles – like those of Madruzzo and Toblino – dot the scene as well.
In Trento’s environs, this time on the opposite slope, whence begins the Valsugana, Lake Caldonazzo is the largest around. Water–skiing is permitted here and on Lake Levico, a small, calm lake lying to the east. Swimmers can dive in any time from May to September. Finally, do not forget the Lake of Molveno, an alpine lake of natural origin that Antonio Fogazzaro called “a precious pearl in a precious treasure,” especially appreciated for having received the most Five Sails designations in the Legambiente’s Blue Guide and Touring Club Italiano.

Alto Adige
Alto Adige, with its enchanting Alpine settings and countless lakes and ponds, offers a vast range of activities for vacationers, whether marked by swims and boating, hiking in mountains and woods, or alternating between sport and rest.
Caldaro, Fiè, Carezza, Lake Resia, and the Sopranes Lakes are just some of the region’s excellent destinations. Lake Braies is a must as well; located in the Val Pusteria, visitors love walking its environs, as they do those of Lake Caldaro – near Bolzano, it is one of the hottest Alpine lakes.
Finally, towering firs and spruces surround the beautiful Lake Carezza, a rather romantic spot also known as Rainbow Lake (“Lec de Ergobando” in the local Ladin language), due to the legend that mermaids and witches inhabit this mystical environment in the Dolomites.